We’ve seen the charts light up like it was Christmas this month, thanks to the heavy flow of new albums taking over the shelves.

For only the second time in history, the entire top six spots on the US Billboard 200 are filled with debut entries. Here in Australia, we have eight new albums scaling our ARIA Top 20, while over in the UK, they have six.

Y’all can obviously expect for it to get even more competitive in the coming months as all the strong sellers come out to play for your seasonal spendings.

This has been a good week for Pink, The Killers, Carly Rae Jepsen, Kanye West and – definitely more than ever – PSY, the K-pop icon responsible for ‘Gangnam Style’.

END_OF_DOCUMENT_TOKEN_TO_BE_REPLACED My friends, we’re about to see some raw nekkid arse. X Factor alumni Olly Murs‘ debut single ‘Please Don’t Let Me Go’ has gone straight to #1 this week in the UK and if Olly‘s a man of his words, he should be dropping them daks any time now to celebrate this momentus occasion.

Olly‘s is the ninth UK X Factor contestant to have achieved a #1 single debut. Keep a tab on this and see where his second single ends up.

Katy Perry‘s Teenage Dream album sold 192,000 copies in its first week in the US and over 14,600 copies in Australia. The title track contends with a #2 debut in the UK behind Olly Murs while a popular album track, ‘Last Friday Night (T.G.I.F.)’ charts at #67 in the US.

Miami Horror‘s Illumination album tumbles out of our Top 20 after making #10 last week and similarly, Clare Bowditch‘s Modern Day Addiction leaves the Top 30 after clinging to #19.

John Butler Trio‘s April Uprising flies back up the chart as they continue touring the country this month. Their new single  ‘Revolution’ debuts at #33 on the digital charts this week.

Cee-Lo‘s ‘Fuck You’ came in at #26 in Australia, despite making the iTunes Top 10 its first few days. ‘F U’ – as it is mannerly retitled – is the most added new song on local radio this week.

Urban Kiwi artist Dane Rumble‘s ‘Always Be Here’ debuts at #19 on our Aussie dance charts this week. The track – being Dane‘s first solo single – was first released in New Zealand last February where it made #13. Check out Dane’s recent interview with JOY 94.9′s Sound Museum.

Pretty Reckless is bound to rub more conservative folks up the wrong way now that their Light Me Up album has hit shelves. The cute – still  probably not the response they were going for – album cover featuring a kid playing with a lighter will probably make this week’s mother’s club meeting minutes.

The band’s front bitch Taylor Momsen – who’s also the face of Madonna‘s “Material Girl” collection – is constantly in the press about how hard rock she is. So go figure.

Adele‘s cover of ‘Make You Feel My Love’ is still travelling back up the UK charts, leaping to #24 this week after Annastacia‘s tear-jerking rendition on X Factor.

Mumford & Sons‘ single ‘Little Lion Man’ creeps up to #91 in the US this week. The track remains as the band’s biggest single to date in Australia, where it peaked at #3. Come to think of it, Australia gave ‘Little Lion Man’ its best ever chart position any where in the world.

Kid Cudi and Kanye West‘s ‘Erase Me’ is the highest charting new single in the US this week, entering at #22. Golf claps, all around.

If I had known that the US market really had Fantasia‘s back, I would’ve dropped this album a week earlier. The messy mami saw her new LP Back To Me sell 117,000 copies to debut at #2, sadly eclipsed by Katy Perry‘s album release on the same day.

On paper, this is Fanny‘s best charting album to date. But check the fine print: her 2004 post-Idol debut sold twice the amount of copies in its first week but only managed to chart at #8. Elsewhere, Fantasia‘s wail of a lead single ‘Bittersweet’ rises to #74 in the US this week.

Usher is out to make that money. He’s not waiting around for the champagne to dry up after celebrating his US #1 album. No, Usher has mouths to feed and so he’s bundled up a few left over tracks and released a spin-off EP to Raymond v. Raymond, titled Versus. The EP debuts at #4 in the US this week and it features the hit singles ‘DJ Got Us Falling In Love’ and ‘Hottie Tottie’. 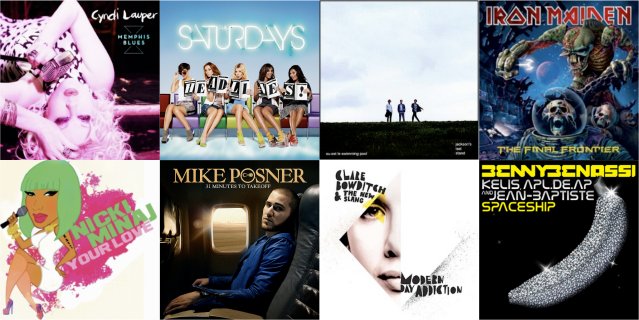 Ke$ha‘s ‘Take It Off’ moved up to #13 this week, making it her fourth consecutive solo Top 20 hit here. In fact, every single that has gone through Ke$ha‘s glittery taint has made Top 20 here.

Mike Posner‘s ‘Cooler Than Me’ copped a sales boost this week, rising to #26 in Australia while the album debuts at #8 in America. Hype surrounding his debut 31 Minutes to Take Off is very much justified. Spoiler alert: 31 minutes into the record, in the middle of ‘Synthesizer’, you’ll hear the sound of a plane taking off.

Eminem is still shifting well over 11,000 copies of his Recovery album here every week. This is starting to scare me. The bogues must be hitting JB Hi-Fi in droves.

Iron Maiden has the highest new entry this week in the UK and Australia. The Final Frontier debuted at #1 in the UK and sold over 7000 copies here to chart at #2. Yet another sign of the apocalypse.

Benny Benassi, Apl.de.ap and Kelis‘ strobelit single ‘Spaceship’ is already shuffling out of the club charts sooner than I had expected. Perhaps, I’m just not partying in the right spots but I am yet to hear Kelis‘ ‘Acapella’ and ‘4th of July (Fireworks)’ on my nightscapades. ‘Spaceship’ drops from #24 to #40 on our club charts this week.

The Saturdays‘ new EP Headlines debuts at #3 in the UK this week – a small miracle given that their last album Wordshaker peaked at #9 and sunk promptly after. One of the girls’ new tracks, ‘Died In Your Eyes’, was first recorded by Kristinia DeBarge. I’m yet to decide which warble I prefer.

Nicki Minaj‘s first international single ‘Your Love’ jumped 30 places up to #74 in the UK this week. Hype surrounding this new rap femme fatale is already reaching fever pitch even before her album is completed. Her debut Pink Friday is due 23 November.

Trey Songz and Nicki Minaj‘s ‘Bottoms Up’ is the highest charting new single in the US this week, entering at #22. Elsewhere, Minaj‘s much-referenced predecessor Lil Kim has postponed her only Australian show to 16 September.

Sweetheart, two extra months won’t sell you any more tickets than you already have. I’ve often wondered why the hell Lil Kim would drag her silicon parts and chinchilla coats down to Melbourne. She remains only remembered for her 2000 breakthrough ‘How Many Licks?’ and the Grammy winning ‘Lady Marmalade’ with Christina Aguilera, Pink and Mya.

Maybe she figures that since Nicki Minaj has yet to crack Australia, this turf is still any nasty femme-cee’s game.

Katy Perry‘s promo single ‘Circle The Drain’ makes a surprising debut at #58 in the US this week. The track, which Kitty describes as her ‘You Oughta Know’, is one of three promo tracks launched digitally in the lead up to her album release.

Acidic lyric of choice: “You fall asleep during foreplay ’cause the pills you take are more your forte… Wanna be your lover, not your fucking mother!”

Florence + The Machines‘ Lungs has cracked the US charts, rising to #61 this week. Could this possibly be the most exciting British pop act Americans have embraced since LaRoux?

Given that Sheryl Crow is also pimping a Memphis blues-type album now, this is a really not a good time for another memaw to enter the game with a similar sound.